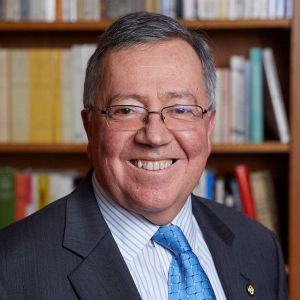 Dr. Cevallos was born in Cuenca, Ecuador and his family moved to Puerto Rico when he was 14. Dr. Cevallos earned his bachelor’s degree in 1976 at the University of Puerto Rico at Mayagüez. From Puerto Rico, he moved to Illinois where he earned his master’s and doctoral degrees in 1978 and 1981, respectively, from the University of Illinois at Urbana-Champaign.  His area of research is Latin American literature, with particular emphasis in the Colonial era.

He began his career in education in 1981 as an assistant professor of Spanish at the University of Maine at Orono.  In 1984, he moved to the University of Massachusetts at Amherst, where he was promoted to associate professor in 1988 and to full professor in 1992.  In 1994, he was asked to serve as faculty advisor to the provost. In 1996 he was selected as a Fellow by the American Council on Education (ACE) and spent his fellowship at Wesleyan University, in Middletown, Connecticut.

Upon his return to UMass, Cevallos became chair of the Department of Spanish and Portuguese. Soon after, he was appointed Vice Chancellor for Student Affairs, a post he held until 2002, when he became President of Kutztown University in Pennsylvania.

In 2014 he became president of Framingham State University in Massachusetts, until his retirement in June 2022.  Currently he serves as President-in-Residence at the Harvard Graduate School of Education for 2022-23.

Dr. Cevallos was a Commissioner for NECHE, and has served on the AASCU Board, the Millennium Leadership Initiative Board  the NCAA DII and  DIII Council of Presidents, the Climate Leadership Steering Committee, the Second Nature Board, the Council for Higher Education Accreditation Board, the Campus Compact Board, and was appointed to represent AASCU at the ACE Board.

Dr. Cevallos and his wife, Josée Vachon-Cevallos, believe in community involvement and have volunteered to serve in numerous non-profit boards in the region.  He is also a member of the Framingham Rotary Club.